Puro Instinct come from Los Angeles, California.  They are sisters, Piper and Skylar Kaplan. Piper is the singer, and Skylar plays the lead guitar. When their debut studio album, Headbangers in Ecstasy came out in 2011, Skylar was sixteen and Piper was twenty-three. Let that sink in, their lead guitarist was sixteen. It is simply amazing that these riffs came from a sixteen year old. They are mostly very skilled riffs, and even if not all the songs are amazing, they are all good. They have great vocals, great solos, and great build up through the songs. The female vocals have a lot of high notes, but they are more Natalie Merchant or Dolores O’Riordan and less Sheryl Crow, Tori Amos, or Sarah McLachlan.

The first album was produced by Ariel Pink and R. Stevie Moore. They have a very poppy, 80’s sound and a sappy California attitude. Headbangers in Ecstasy is a great album title. Isn’t the point of music, to work a feeling into a better one? The songs very much follow the title’s warped emotional trend. “Escape Forever”, “Slivers of You”, “Silky Eyes”, “Everybody’s Sick”, “Luv Goon”, and “Lost at Sea” all do this. “Escape Forever” may be the best, and most complete song. “Silky Eyes” is also one of the better songs, and has a good solo. Some of the other songs from the album are “California Shakedown”, which shows the attitude and has a great guitar riff. Perhaps it points at rich people who do drugs, hence shakedown. “No Mames” has a good bass line and is a really strange song. Then there is “Vapor Girls”, which is surreal sounding.

All along the way are these slightly unnecessary radio interruptions done by R. Stevie’s voice, under the title KDOD. Lastly, “Stilaygi” may be the second best overall song, to “Escape Forever”. It’s 80’s themed like many of the songs. More importantly it is incredibly clever, and Ariel jumps in at the interlude to say “You are still my yagi.” A stilyagi is a russian hipster effectively, and is the perfect topic for a song. They really make the right point about “hip” culture, when Piper sings, “When you look around in the U.S.A. today, because it doesn’t seem like the kids have much to say.” Why do we need pop culture to tell us what’s cool? Everyone should have a voice.
Bottom line, even if you don’t get the glam rock female romance thing the music is more than good enough to make up for it.
There are some new songs on

, such as “6 of Swords”, but no new album announced.
The B-Side, “Sunburn” is also really good, but impossible to find for download.

Here are some of the better songs:

Buy their music on ITunes, 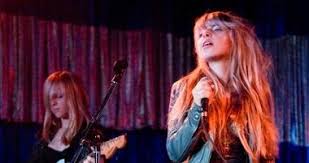 I just think this is a great picture.